The Origin of Hendricks Field

From a brochure commemorating the 38th anniversary

If you are among the many who wonder how Hendricks Field was established in this section of Florida, then you’ll be interested to learn the story of a visionary group of not-so-young and not-so-old citizens - a group willing to risk their necks to help their community and their country.

It was in the summer of 1940 when that group gathered around a table. There were sheaves of data upon it; photographs of Sebring, their home, could be seen among the data. There was a tenseness in the air; they had a job to do, and they were ready to tackle it, come what may.

The leader of the group of men arose and said, “Gentlemen, I think we shall find ourselves embroiled in World War II before many months have passed.Our country is establishing army and navy installations throughout the land, and especially in Florida. We haven’t been considered because we have offered our government nothing to obtain consideration. I believe conditions in Highlands County are ideal and the War Department would be interested in the advantages that exist here abouts I propose that we lay before the War Department the many advantages we have to offer in this locality. The effort may be fruitless, but at least we can show our patriotism by offering what we have.”

The speaker sat down. Other men arose and voiced their opinions. All agreed that “now is the time for all good Sebring citizens to come to the aid of their country.” The group filed out of the smoke-filled room, each carrying a sheet of paper on which was outlined what he was expected to do; compile more data. And each was pledged to keep the proceedings secret. And that secret was well kept.

Not long after, a prospectus containing Sebring’s bid for an army installation was printed, and taken to Washington by members of the group. They called on the Hon. J. Hardin Peterson, their representative in the House of Representatives; on the Hon. Claude Pepper and the Hon. Charles O. Andrews, United States Senators from Florida  And with the aid of these three lawmakers they placed copies of the prospectus in high places within the War Department and other government agencies.  The group returned to Sebring, where they bided their time.

Months passed - in fact, it seemed that so much time had passed that nothing would come of the trip to the nation’s capital. So they continued to bide their time. An acorn doesn’t become a mighty oak over night.

Came the Spring of 1941, and the rains, and the blooming of trees and flowers - and the sprouting of the seed the group had planted in the War Department.  Khaki-clad figures came here, some of them with stars on their shoulders; and eagles; and silver and gold leaves; and silver and gold bars. And one with gold bars was to vividly recall that trip about four years later, because that second lieutenant is now Col. Charles D. Farr, the present commanding officer of Hendricks Field.

The uniformed men were representatives of the Southeast Army Air Corps Training Center, predecessor of the Eastern Flying Training Command. They were on an inspection trip; they were looking over a suggested site for an air base. They hurled question after question at the men responsible for their presence on a broad, flat, palmetto-covered tract. Evidently the answers were both favorable and interesting. More questions were asked, such as: “Can you obtain more acreage?” “Can you extend Sebring’s power lines and supply the current?” “Can you get a road to the base?” Those and many other queries of “Can you do this” and “Will you do that?” were propounded. And the answers always came in the affirmative.

June 13, 1941 dawned and a few hours later a telegram was received by the group of energetic, courageous, visionary Sebringites. It was a message to set the entire city rejoicing. Sebring had been selected as the site of a basic flying school, to be built on the broad, flat, palmetto-covered prairie.The following month brought the signing, sealing and exchange of papers between the Secretary of War and the City of Sebring, whereby the site was leased for 99 years, at $1 per year, by the government.

The group responsible for all the happenings up to this time is a modest one. They want no credit, no praise, no mention of their names. They are thrilled with the mighty oak from the seed they sowed, and they wish to remain nameless.

For historical purposes, it is well to recall some of those Air Corps representatives who gave approval to the site of what is now Hendricks Field. Among them are: Lt. General George Stratemeyer and the late Major General Walter Weaver, former Commanding Generals of the Southeastern Army Air Corps Training Center; Brig. General Luke T. Smith, and the aforementioned Col. Charles D. Farr.

Those not-so-young and not-so-old men of Sebring performed a great service for their community. They had stuck out their necks to get “something” for Sebring. They were well rewarded for their efforts. But there was plenty of work ahead - work which would require the cooperation of all Sebring people. They had no difficulty in obtaining that cooperation.

This article was originally published for the Sebring Historical Society 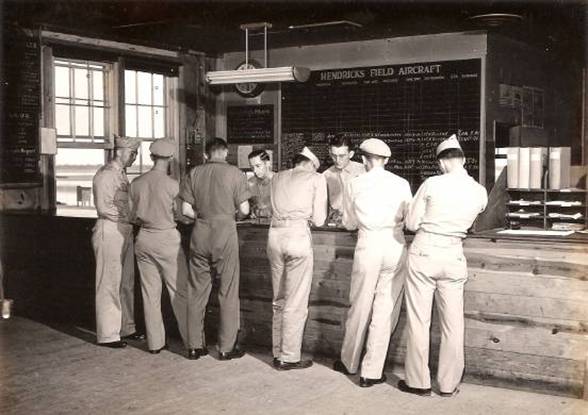 Photo courtesy of the family of Capt. Frank L. Brady and the Sebring Historical Society

GO BACK TO FOREWORD

RETURN TO THE CONTENTS PAGE