REPORT OF THE AIRPORT COMMITTEE

The first reaction to the report that an interim permit for occupancy of Hendricks Field for civilian aviation purposes, has been, in the most cases, “How can this city maintain such a tremendous installation?”

This is a sensible question when it is considered that there are more than 500 structures of various kinds on the field; a quantity of concrete in runways, taxiways and aprons which if made into roads twenty feet wide would reach more than 100 miles; and facilities such as sewers and waterworks which are extensive as those of the city of Sebring.

The extent of development and maintenance of Hendricks Field as a civilian and commercial airport is a question which must be answered only by the administration of the City of Sebring and your committee can only give you the facts as they were learned in the past week.  The governmental machinery for the disposition of airports such as Hendricks, to municipalities is so new that it has not yet been completed to the degree where it can carry out the complete transfer of properties to cities and local governments.  Therefore, until such machinery is functioning, “interim occupancy permits” are issued so that cities may have the right of entry and start functioning.

Your committee composed of Council President, F. M. Schumacher; City Attorney, Joe Kinsey; and Chamber of Commerce secretary, A. C. Altvater, went to Washington on Sunday 10 February and found that Congressman Peterson had arranged for a conference with Mr. Arthur W. Manley and Mr. Cummings of the War Assets Corporation who were entirely conversant with the situation at Hendricks and who informed us that the Field had been declared surplus on 25 January 1946.  They stated that the 30 days which the City normally has in which to exercise its priority on the Field would not start until such a time as the City was officially notified.  Due to the fact that many fields are being processed in a similar manner, this city had not received to date such an official notice but upon the request of Congressman Peterson and City Clerk Dan R. Stevenson, the War Assets Corporation was prepared to authorize an interim occupancy permit.  This permit was issued on 11 February 1946.  Mr. Cummings and Mr. Manley were interested principally in the disposal of real property and we were unable to determine the agency and the individual who could give us definite information on the disposition of airport equipment.

Congressman Peterson had been in contact with Mr. Cecil H. King of the War Department who, on the date we arrived was being transferred to the War Assets Corporation as military liaison.  He gave us some very definite information as to the disposition of surplus tools and equipment.  Although he made serious effort, he was unable to locate in Washington a copy of the inventory of necessary operating equipment which is being retained on Hendricks Field for transfer to the City.  The project officer of Hendricks Field has agreed to turn over such a list if we can obtain authorization from higher authority.  Your committee has made several efforts to obtain such authorization but so far has been unsuccessful.

“Declaration of Policy.  It is hereby declared that the national interest required the disposal of surplus airport property in such a manner and upon such terms and conditions as will encourage and foster the development of civil aviation and provide and preserve for civil aviation and national defense purposes a strong, efficient, and properly maintained nationwide system of public airports, and will insure competition and will not result in monopoly.  It is further declared that in making such disposals of surplus airport property the benefits which the public and the Nation will derive therefrom must be the principal consideration and the financial return to the Government a secondary consideration.  Airports which are surplus to the needs of owning agencies may be essential to the common defense of the Nation or valuable to the maintenance of an adequate and economical national transportation system.  In such cases and in accordance with the rules established herein such airports may be disposed of to State of local governments for consideration other than cash.  Where airports are not desired they shall be classified as airports or otherwise according to their best use and any disposition hereunder shall be for a monetary consideration.”

Your committee has contacted by phone, the Jacksonville office of the RFC and the chief engineer of the south Atlantic division in Atlanta and from conversations with them and with officials in Washington, it is our understanding that the government will eventually transfer to the City of Sebring without monetary consideration or transfer of funds, any and all buildings, any and all facilities and any and all tools and equipment now held at Hendricks Field which will be necessary to the operation of a civilian airport.  However, it is also our understanding that it will be necessary to justify the use of any of these categories.  For instance if a field to accommodate only those uses which the city has need of at the present time are contemplated, transfer would only be effected for possibly only the runways, one or two hangars, and probably a house or two for the use of the airport manager.  On the other hand if development is anticipated such as a school which might teach 500 men; a freight transport depot which would require warehousing; an operation which would need the machine and repair shops, complete facilities for all these operations would be given without cost to the city.

Inadvertently we were directed to the office of Mr. Glen A. Gilbert, chief of the air traffic control division of the CAA, and we talked to Mr. H. F. Cole and Mr. C. W. Carmody.  We learned from them that we did not need to man or maintain a traffic control tower until such a time as we had a traffic problem.  They also advised us that the Government exercised no control over air fields.

These men arranged for us to meet Mr. Phillip Moore of another branch of the CAA who gave us a great deal of advice on opening and operating an air field.  He definitely repeated the statement that the Government through the CAA and other organizations exercised no control over air fields directly.  The CAA does exercise control over aircraft.

Mr. Moore gave us the names of several men in CAA whom he advised us to see and who could give us some definite assistance in any problem arising from the opening and operating of a municipal field.

We visited the office of Mr. F. M. Lanter who is the head of the Air Safety Division of the Department of Commerce.  Although he gave no additional information, he advised us to get in touch with the regional administration in Atlanta who could also give some assistance.

Since returning we have found that the Army will probably occupy the area for quite a few months, and be automatically providing police and fire protection during that time.  We understand that a group consisting of representatives of the War Department, the RFC and the CAA will visit us at a later date and to them it will be necessary to offer justification for requests of buildings and necessary operating equipment which will be turned over to the City. 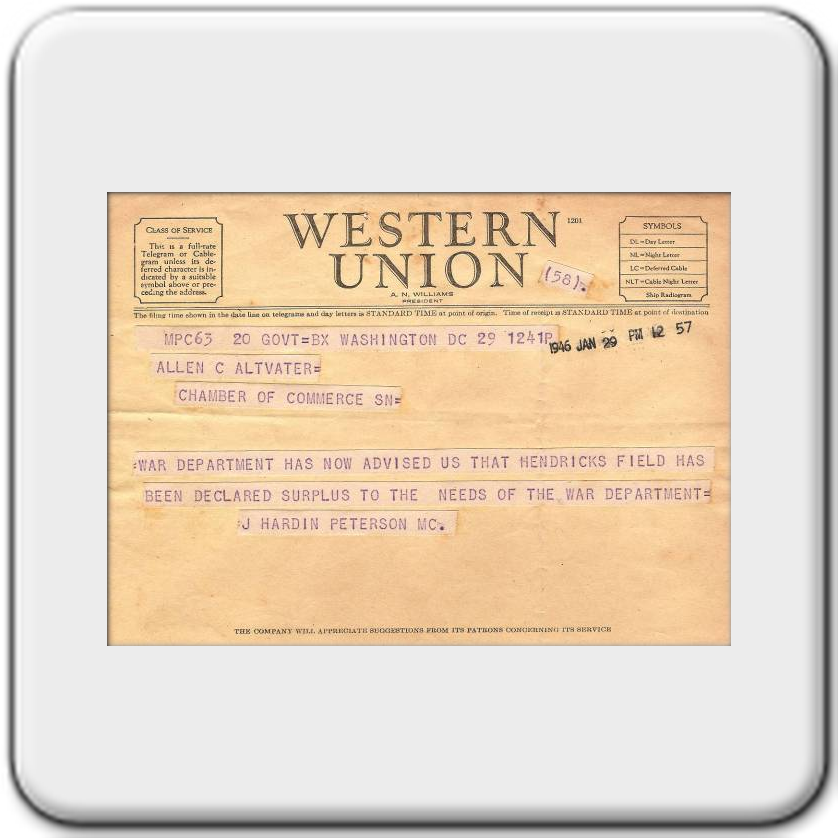 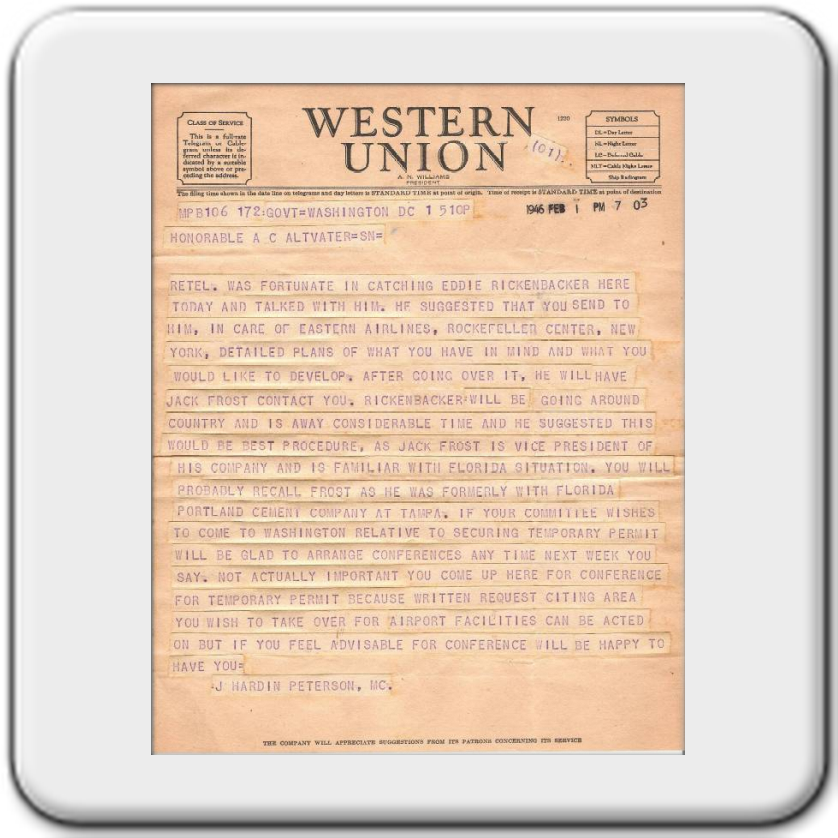 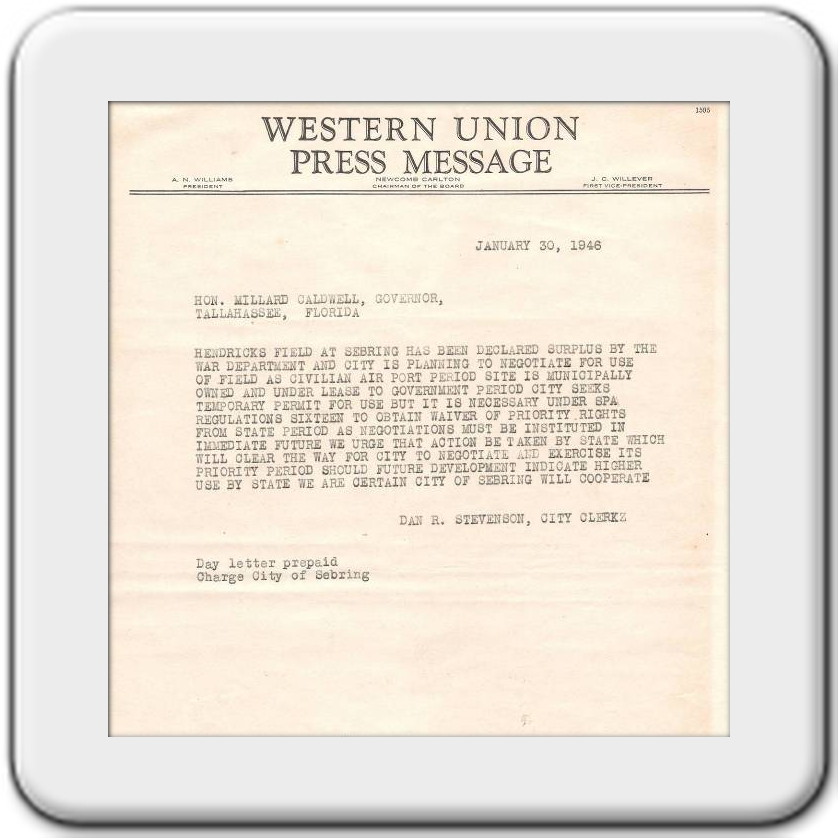 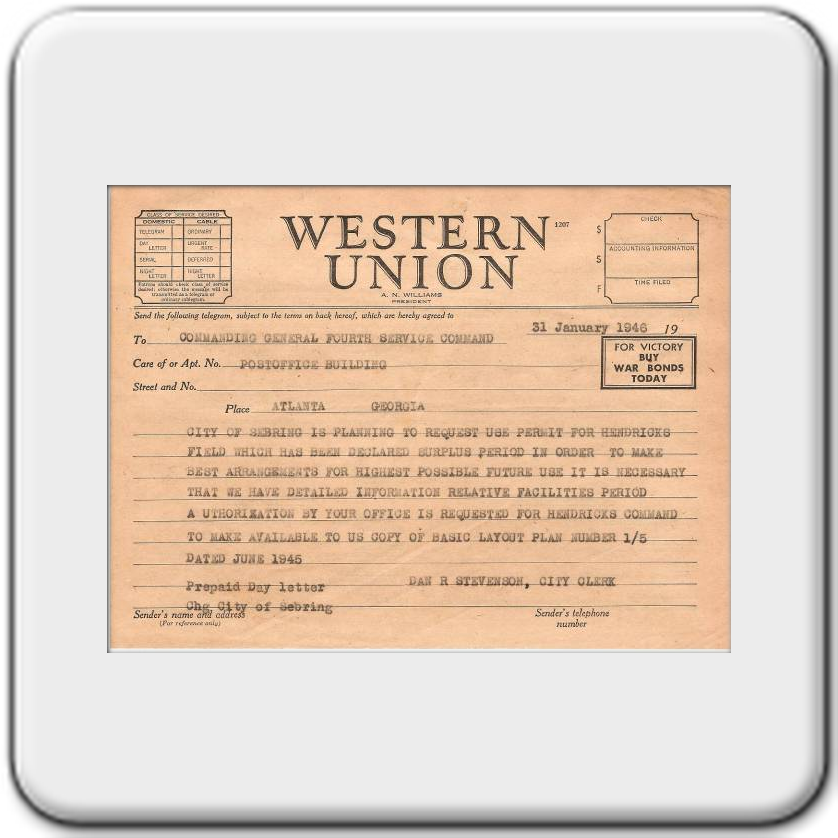 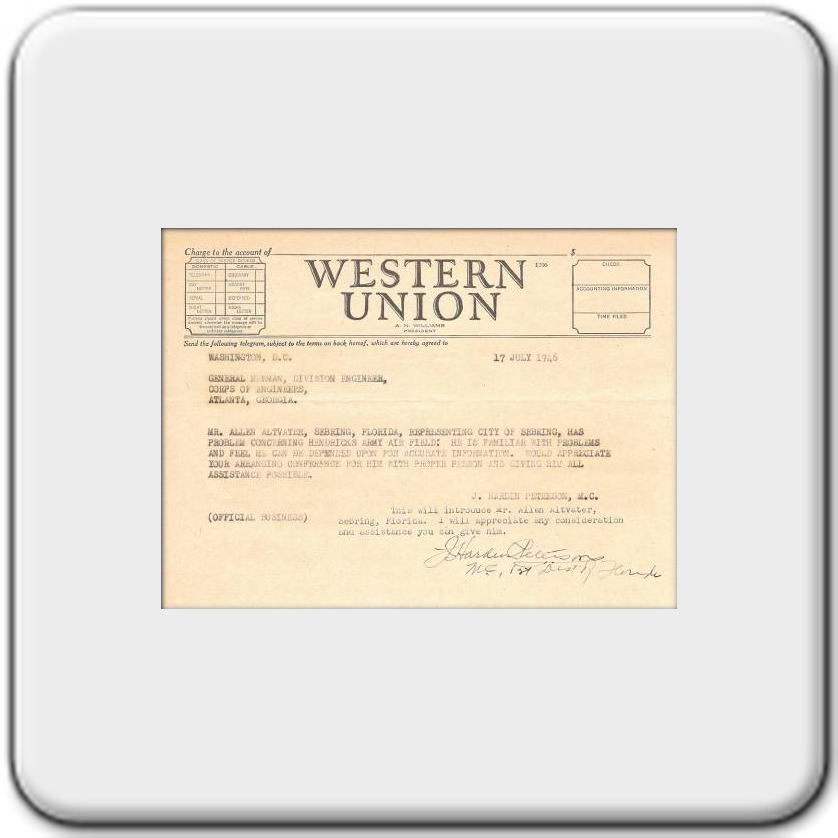 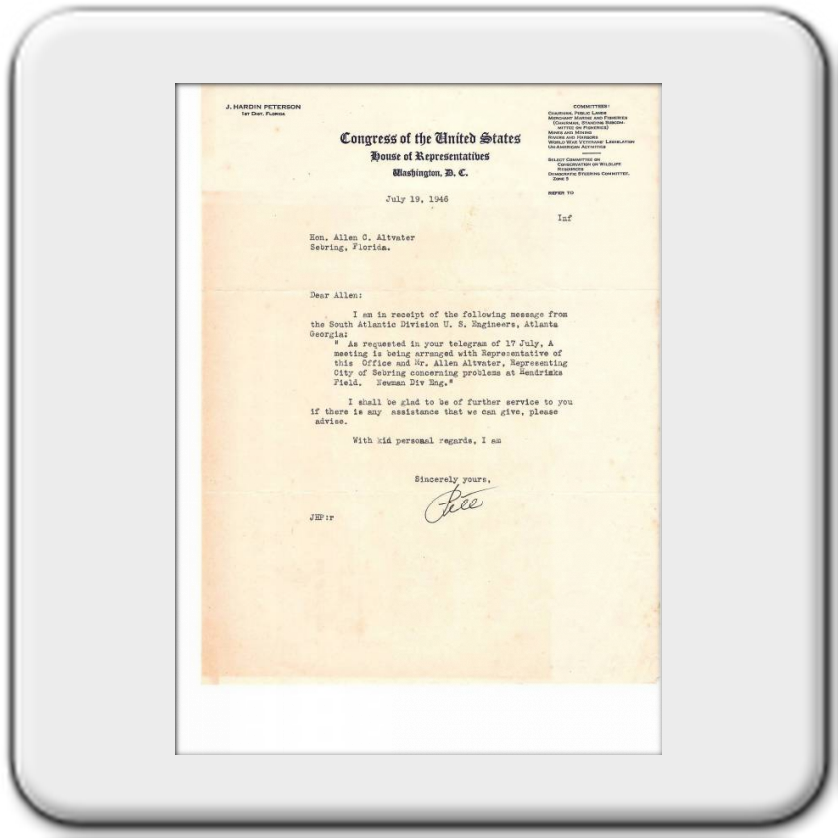 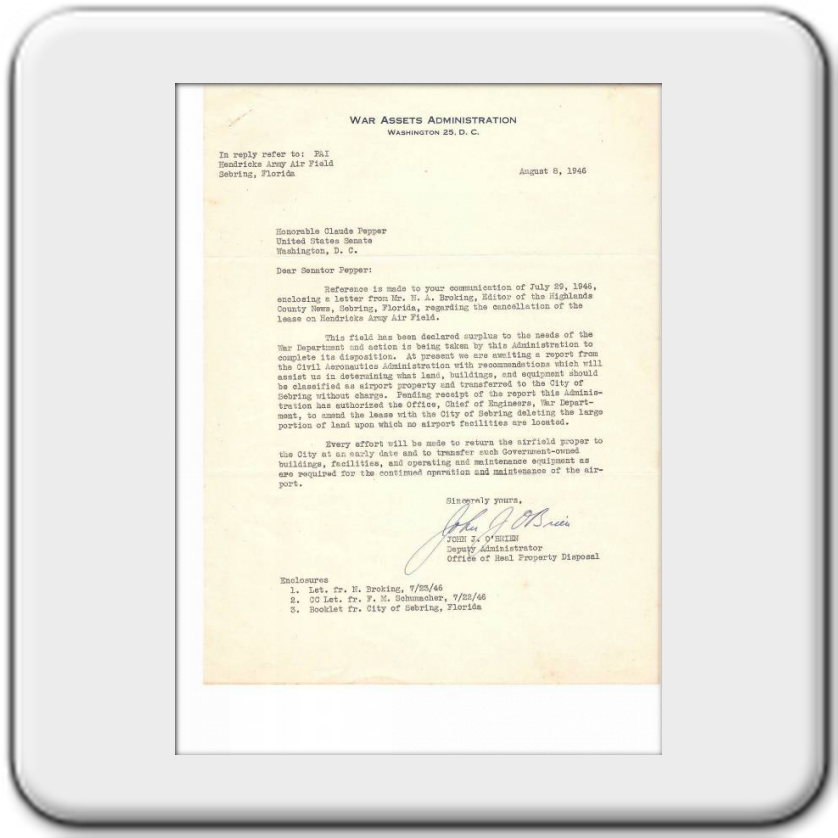 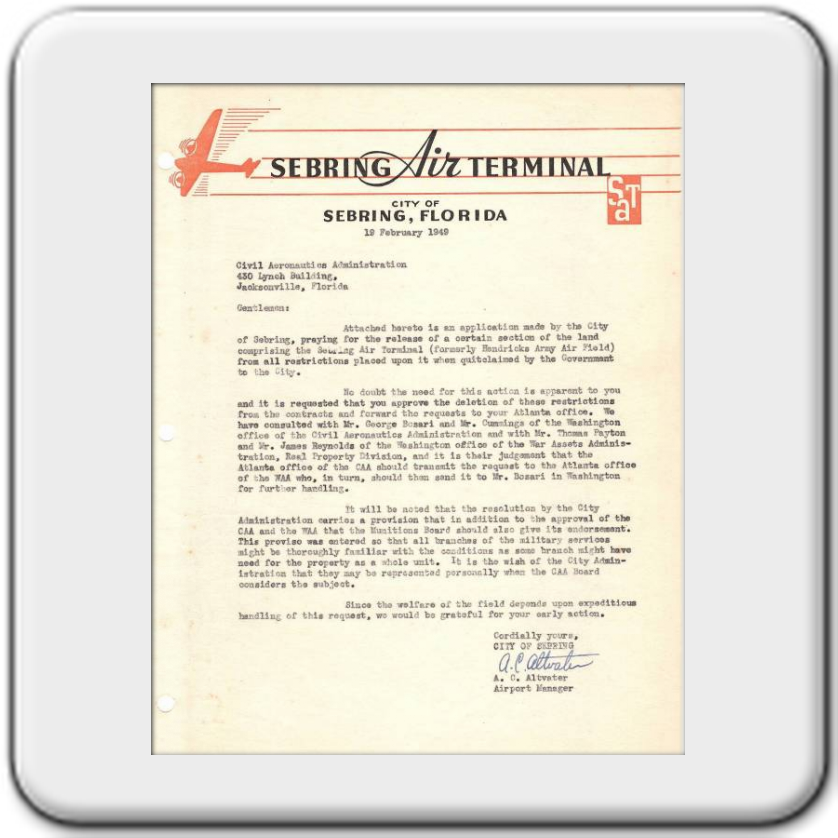 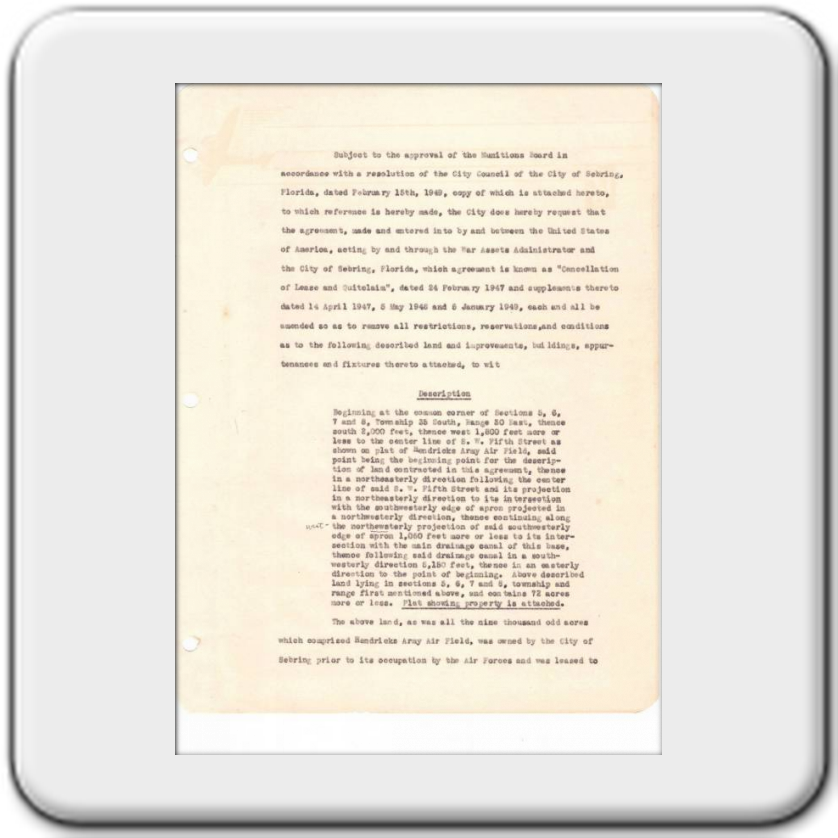 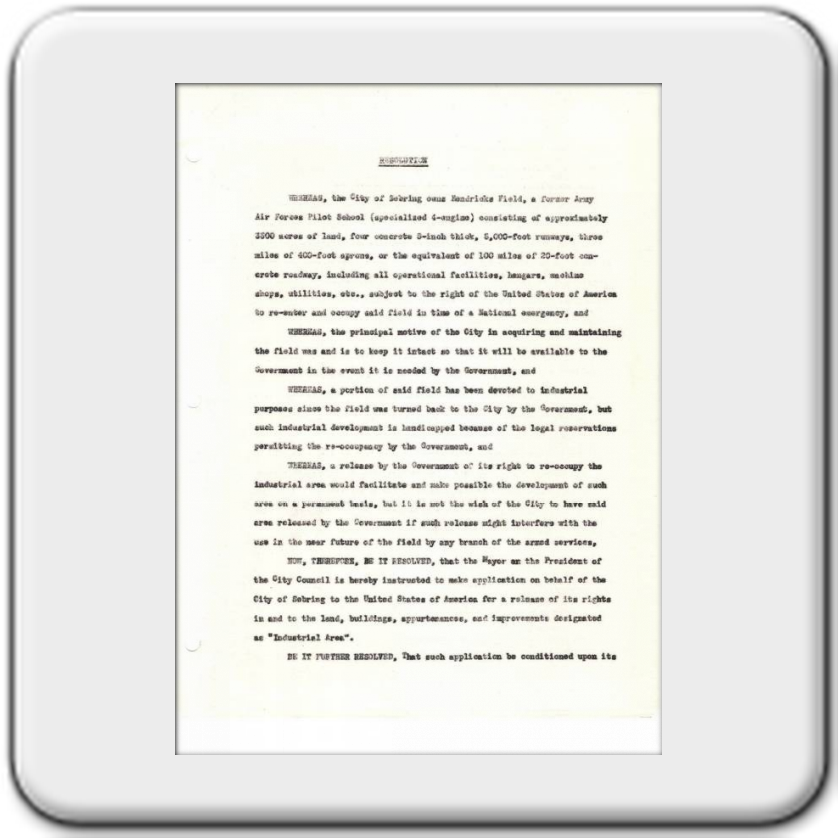 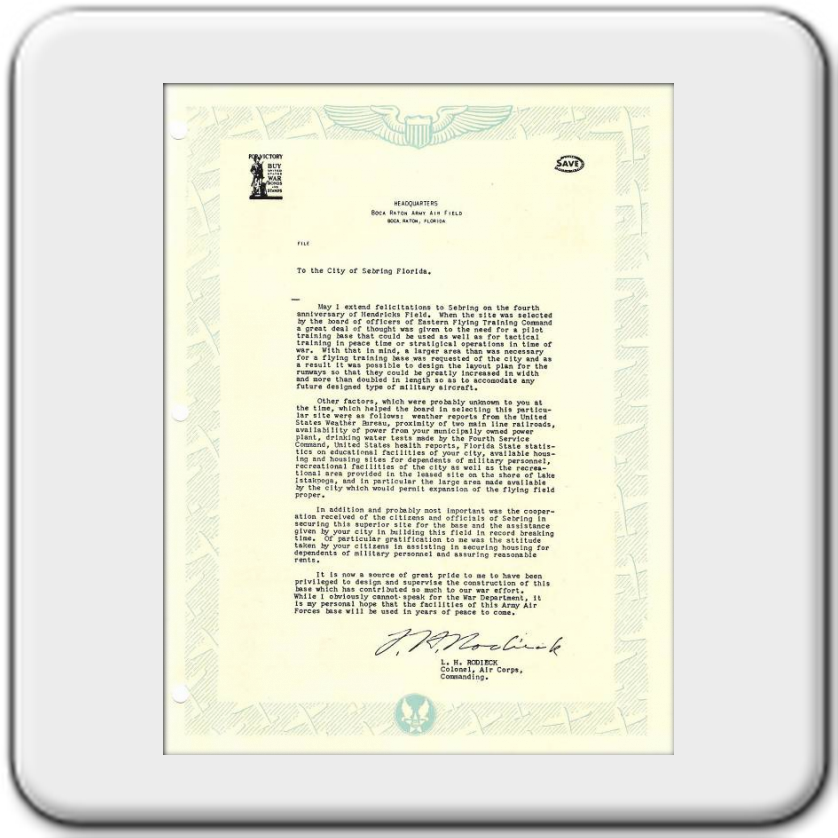 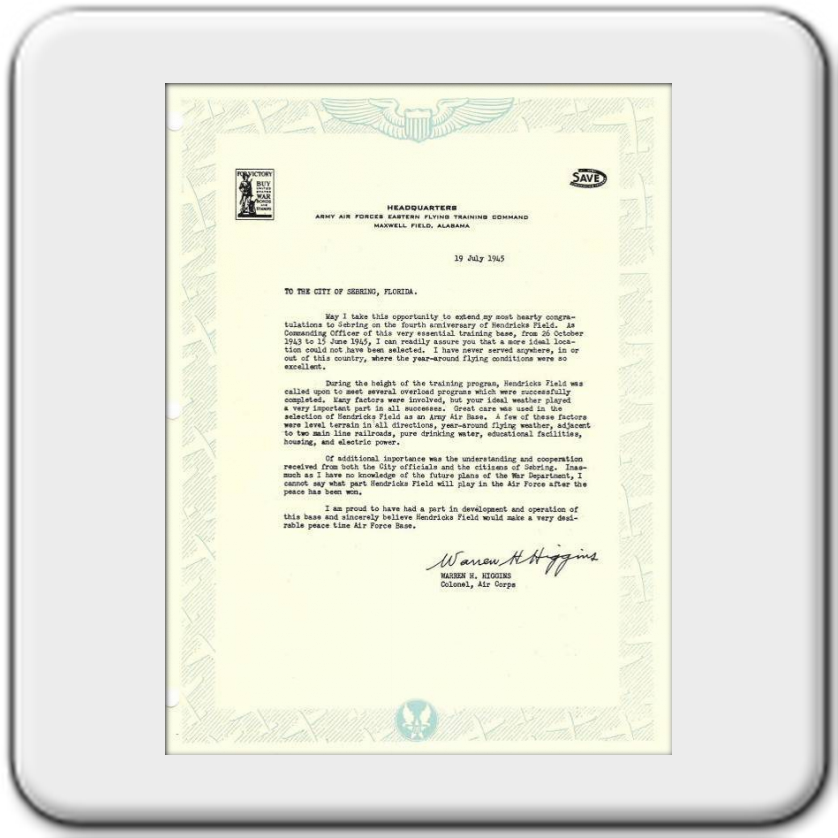 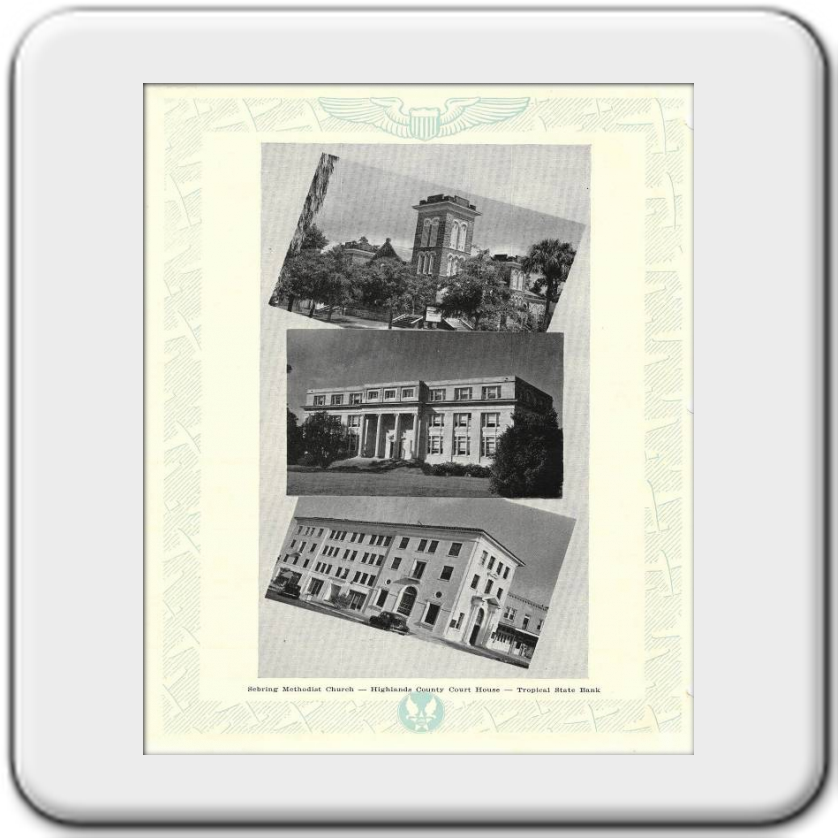 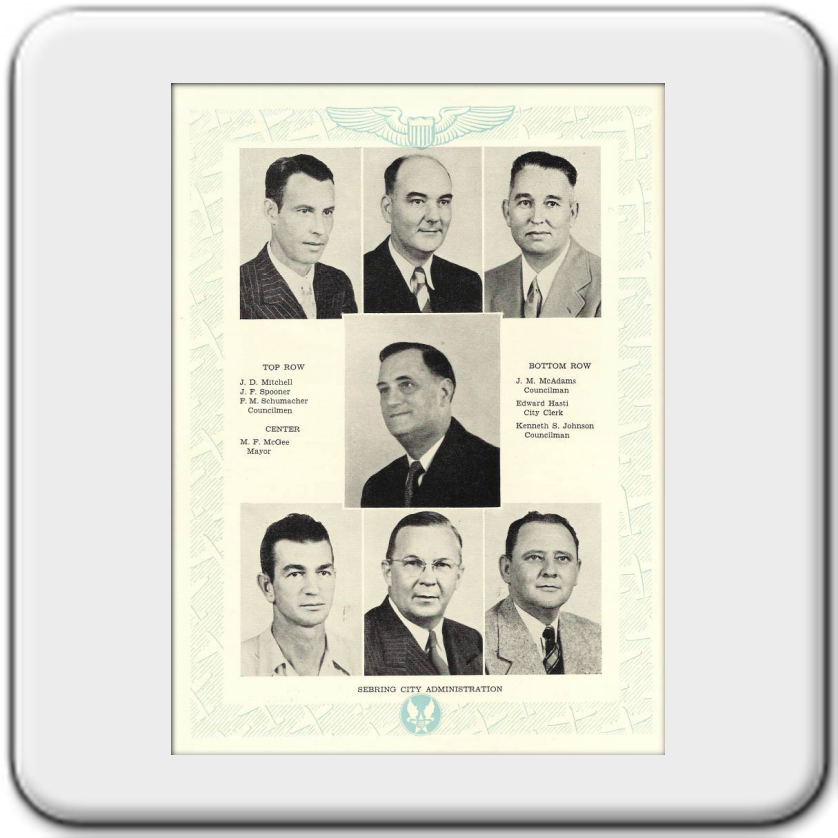 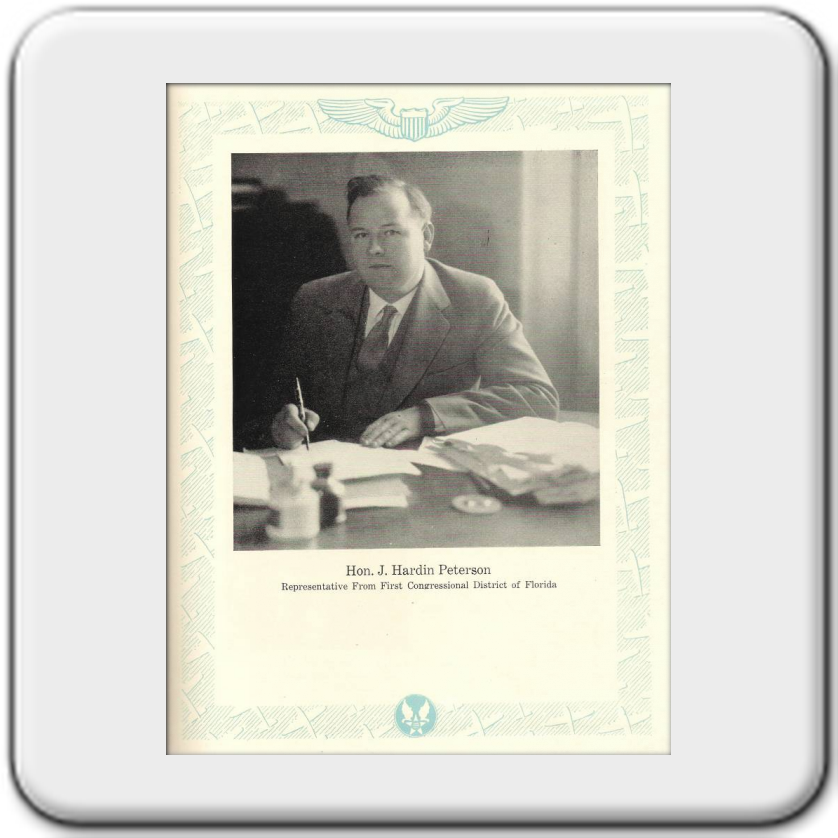 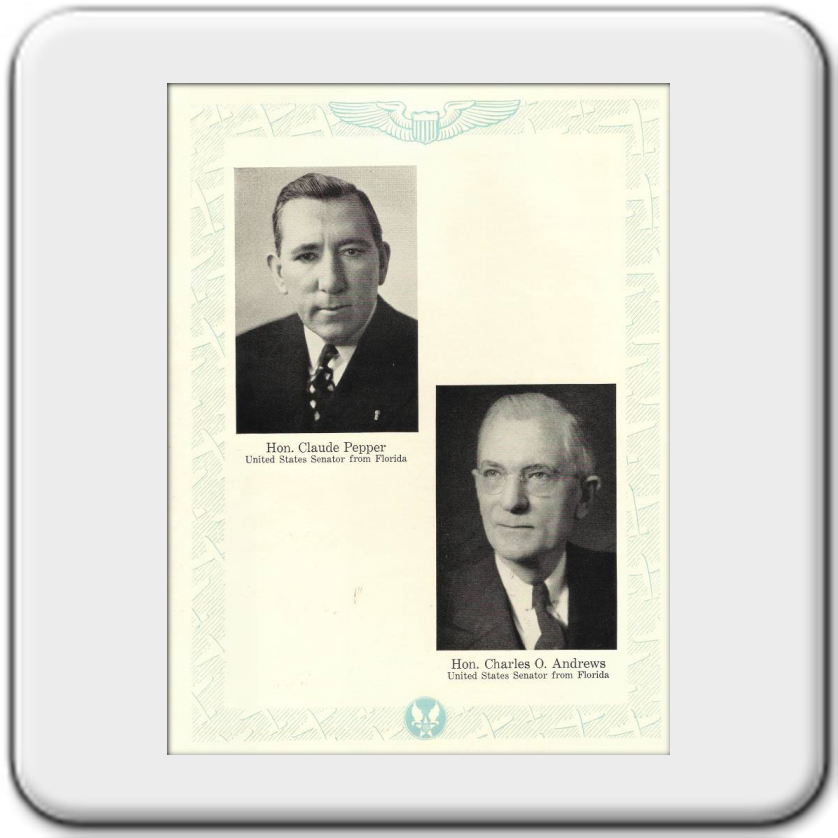 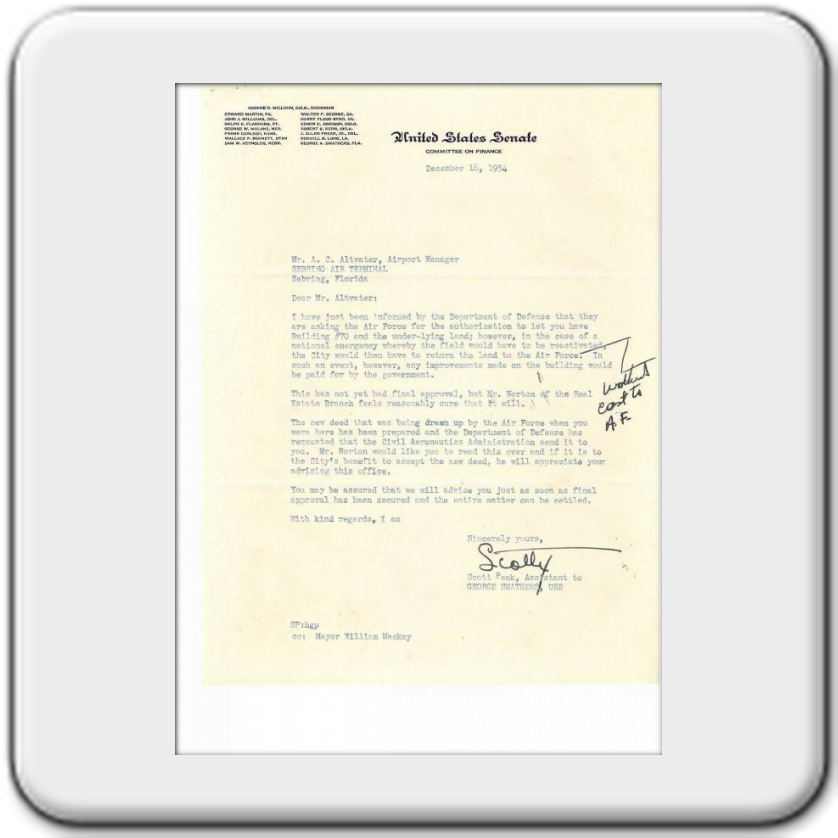